A fate worse than McMurder at McDonalds 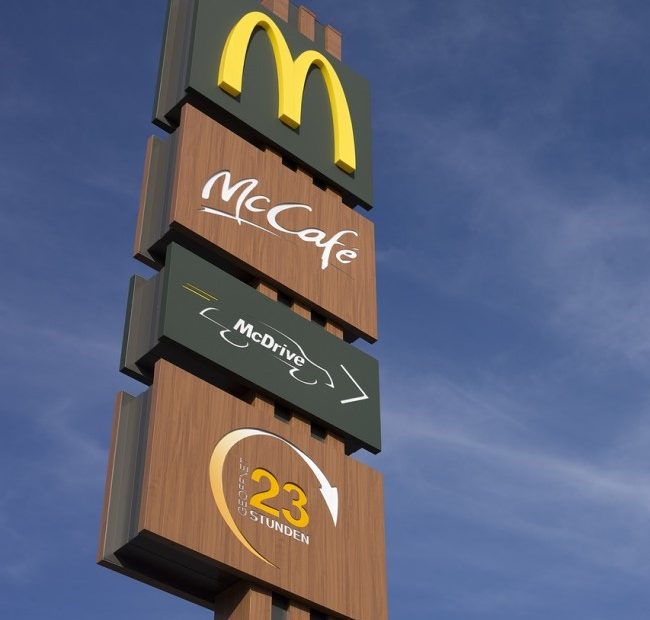 McDonald’s began as a burger stand in San Bernadino, California, owned by brothers Dick and Mac McDonald. Their brilliant contribution to food preparation was the application of Henry Ford’s theory of assembly line construction to milkshakes. Armed with a massive grill, a gargantuan deep fryer, and 8 Multimixer shake machines (each Multimixer had 5 spindles), their mission was to ensure customers were in and out in less than 5 minutes.

In 1954, Ray Kroc mortgaged his home and put his life’s savings into becoming the sole distributor of the Multimixer. He visited the stand in California, and urged the McDonalds to set up new locations, hoping to sell a hoard of Multimixers to them. When the brothers proved reticent, he convinced them that he himself could operate another location for them, and in 1955, opened a McDonald’s restaurant in Des Plaines, Illinois. It sold burgers, fries, and shakes to the tune of $366.12 its first day. Today, that would be about $2,352.46.

McDonald’s systemwide sales in 2000 exceeded $40 billion, operating income was approximately $3.3 billion. McDonald’s has had approximately 16.5 billion customer visits in its history. There are 28,707 McDonald’s restaurants worldwide: 16,795 are franchises, 7,652 are operated by the company proper, and 4,260 are operated by affiliates. Approximately 790 of the affiliate restaurants are due to McDonald’s acquisition of Boston Market in Q2 of 2000. McDonald’s, realizing that they’re brand was not appropriate for all markets and demographic targets also purchased Aroma Café, Chipotle Mexican Grill, and Donatos Pizza, with a minority interest in Pret A Manger. This is part of their long-term diversification strategy.

In 2000, restaurants were opened in American Samoa and French Guiana, bringing the total number of countries in which McDonald’s operates to 120.

The McDonald’s operation is decentralized. Each region in which McDonald’s operates (where regions roughly correspond to continental boundaries) has its own executive management group, uses local produce and meat, employs local staff, and is empowered to market McDonald’s products as they see fit, including the creation of regional menus.

All in all, McDonald’s is the most successful restaurant business in the world, known for high quality food products and extremely fast service. On a personal note, though McDonald’s does not serve food that is generally considered “healthy”, I have OFTEN enjoyed their standard fare as just that: STANDARD. Solid as a bloody rock. I can honestly say that there is no company on earth that I trust more to provide me with consistently good service than McDonald’s.

Having said that, why is it that this culinary powerhouse can’t make a decent fucking cup of coffee???

When I got older, my friends and I would stay up all night playing video games or watching movies and around 7 am we’d hit McDonald’s. Teenage boy’s typical order: two McMuffins, two hashbrowns, two cartons of milk, two juices, and maybe some pancakes. On one of those visits, I ordered a coffee. I shudder to this day to think of it.

Imagine this. You’re a punk-ass kid trying to grow up, thinking, “Hey, I’m a man. It’s time I had coffee with my breakfast. That’s what MEN do. After breakfast, I’ll put a jet engine in my car, hit the woods and shoot dinner, bang some chick, get really drunk, pass out. When I wake up the next day head pounding, dick throbbing, lips stained with blood, I’ll light up a big cigar and I’ll have more coffee! RAAAAAAAAARRRRRR!!!”

So we went into McDonald’s, and I ordered the customary and ridiculous amount of food, but for the first time I also ordered coffee. My friends thought I was high. They could smell something different, and it made them curious. I was their guinea pig, ready to take one for the team like that stupid monkey that got shot into space while the really smart primates looked on from a bunker. The lady behind the counter raised an eyebrow at me as I ordered (you guessed it), “Coffee. Large. Black.” There would be no half-measures here, oh no. I was going to be the manliest man to ever set foot in that McDonald’s. If there had been a biker in the place at that moment, I would have walked up to him holding my cock, spit in his face, and pissed on his boots, screaming “Pussy!” at the top of my lungs. Bad-ass didn’t even begin to cover it. I was badder than Bruce Lee, I was grittier than Clint Eastwood, I was tougher than Humphrey Bogart, I was the mother-fuckin’ man, baby.

And then I paid the lady (she didn’t know who she was smirkin’ at), took my tray back to a table, sat down, and had a sip.

It tasted like someone had taken a big steaming load of donkey shit, dried it out, roasted it until it was ashes, mixed it with tar, passed lukewarm water through it, stuck their finger in their ass, stirred the concoction with said finger, and presented it to me, the happy consumer. How could this be??? Why would anyone subject themselves to this horror, this absolute horror???

I was not so easily put off, however. I had about 19 more ounces to go, and my friends were watching. There was no WAY I was going to show fear, even though I wanted to cry and beg god to intervene, to tell him I would never sin again if, in his infinite mercy, he would change my coffee to something less caustic. Like vitriol. Or Drakkar Noir. But I’m sure god was enjoying himself immensely watching me take sip after sip of Lucifer’s own filthy black bile. I tried to smile, to show I was enjoying it, to put on a face of saintly contentment, but the best I could manage was that look that Kirk Douglas gives at the end of Spartacus when he’s crucified and in such pain that he can’t even manage a whispered “kill me”. I pressed on and finished it, every last drop. Looking for an opening, a weakness, some sort of crack in my hardcore teen-angst-armour, one friend had the gall to ask me, “How was it?”

Instead, with a remarkably even tone, I said “They make it a bit strong here, next time I’ll ask for a spot of cream, maybe some sugar. How’re the pancakes?”

Side note: this particular scene, where suffering was laughed off as inconsequential, was replayed MANY times with that particular friend over the next few years in a variety of circumstances, including but not limited to: twisting nipples 180 degrees counter-clockwise, very hard punching bouts, assorted projectiles fired at random soft spots, holding hands over candle flames, hard-packed snowballs aimed at either the head or genitals, and (my personal favourite) eating dozens of burn-your-ass-on-the-way-out nuclear chicken wings. Ah, the good old days.

Regardless, I did not try coffee again for a very long time. It took years, but memory fades and eventually I had another cup. It was nowhere near as foul as McDonald’s coffee. It was, in fact, quite pleasant. I began to drink coffee often, more as a social beverage than as a breakfast stand-by. I have had coffee all over the planet, it is the yardstick of my travels. I’ve had cappuccino in the piazzas of Venice and Rome. I’ve had café au lait in Paris along the Seine. I’ve had café con leche in Madrid near my grandmother’s flat. I’ve had dark coffee in Turkey, light coffee in Hong Kong, rich coffee in Mexico. I’ve had 180-proof coffee in Ireland, and dishwater coffee dashing through the streets of New York. At home I have made coffee in a myriad of different ways. I enjoy a good cup of coffee. To date, McDonald’s has never served me one.

Every once in a while, after an all night bender, I find myself on the way home with too much alcohol in my blood and not enough food in my belly. So, where do you go when you need to get something quick that you can eat while you travel? McDonald’s. By the time you get back to your apartment, you’re done, and you can throw off your clothes and fall into bed for an hour or so. Simple, effective, tidy. The problem is, tipsy people tend to forget details, like the fact that they abhor McDonald’s coffee. They get me every single time.

So, if some executive at McDonald’s is reading this, I would like to say this:

Thank you, McDonald’s, for years of impeccable quality and service. Thank you for providing me with a culinary safe haven when I’ve needed it most. Thank you for your incredibly cheap cheeseburgers that hit the spot when I have to wolf something down in the car on the way to something. Thank you for your philanthropy and for trying to be a decent corporate entity, as difficult as that might be at times. But god damn your fucking coffee. I hate it with the white-hot intensity of a thousand nova suns, and I am beginning to hate McDonald’s for selling it. It should be banned by the FDA. You should be put on trial by the ICJ for violating several articles of the Geneva Convention. Please, please, please if as an executive, you still have some part of your soul left, cling to your fading humanity and start serving better coffee. I and the world will be in your debt.